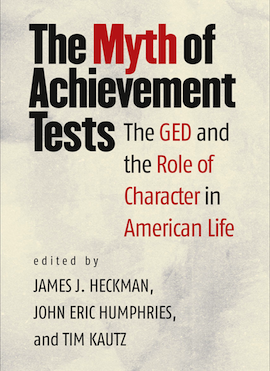 The Politico article I referenced in my last post noted the January 9th release of a new book, The Myth of Achievement Tests: The GED and the Role of Character in American Life, co-edited by  Nobel Prize-winning economist and longtime GED critic James J. Heckman. Heckman’s economic arguments in favor of investing in early childhood education have been highly influential, with both policy people and those in the business community. He has often coupled those arguments with critiques of our adult education and job training investments—particularly the GED program.

The book’s promotional material outlines the authors’ basic case against the GED:

The Myth of Achievement Tests shows that achievement tests like the GED fail to measure important life skills. James J. Heckman, John Eric Humphries, Tim Kautz, and a group of scholars offer an in-depth exploration of how the GED came to be used throughout the United States and why our reliance on it is dangerous. Drawing on decades of research, the authors show that, while GED recipients score as well on achievement tests as high school graduates who do not enroll in college, high school graduates vastly outperform GED recipients in terms of their earnings, employment opportunities, educational attainment, and health. The authors show that the differences in success between GED recipients and high school graduates are driven by character skills. Achievement tests like the GED do not adequately capture character skills like conscientiousness, perseverance, sociability, and curiosity. These skills are important in predicting a variety of life outcomes. They can be measured, and they can be taught.

Using the GED as a case study, the authors explore what achievement tests miss and show the dangers of an educational system based on them. They call for a return to an emphasis on character in our schools, our systems of accountability, and our national dialogue. (my emphasis)

I  expect the book’s discussion of “character” skills may stir up some controversy among those in the adult education field (although, obviously, it’s unwise to judge the book’s arguments based on the publisher’s brief description). In any case, because Heckman is attached to this book, I think it has the potential to be pretty influential among policy makers. Based on the description above, I don’t think there is a lot here that Heckman hasn’t argued before, but its publication in book form may bring those arguments to a wider audience, at a time when both the GED test and adult skills are  getting slightly more national attention.